For my 59th birthday last September, I traveled to Italy to do research for the historical novel I am writing about a woman artist of the Renaissance, Sofonisba Anguissola. My journey began in Amsterdam because I had planned to see a show there called Van Gogh Dreams. This title matched the name of a poetry anthology I had put together in 2018 with one of my father’s collages on the cover. But silly me! I had mistaken the closing date of the show and missed seeing it by four days. Thankfully, the Van Gogh Museum had plenty of  other delights to offer. And, it was the show that put the idea in my head in the first place to get myself across the ocean. I think that Vincent and my father were in cahoots to get me to Italy to focus on this novel. In the end, it all turned out well. 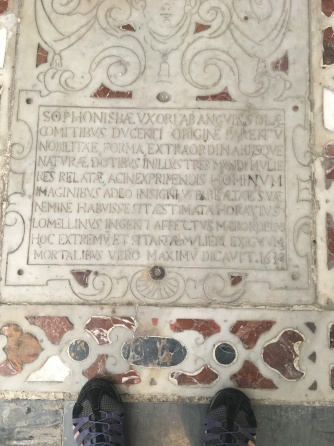 I began in Sofi’s birthplace, Cremona, a picturesque town in northern Italy that felt to me like a medieval version of the place I live now, Sheboygan, WI. I sped through all the Italian cities in which Sofonisba worked including Milan, Rome, (where she studied with Michelangelo for a year and a half in her early twenties. Can you imagine?) Genoa, and Palermo. That last stop, on the island of Sicily, is where Sofonisba died at age 93. I found her tomb in the Church of San Giorgio dei Genovesi and I just sat there in the stifling September heat and cried. I couldn’t believe I had brought myself all the way to her resting place. And Palermo blew my mind. I had no idea there was a strong Arab influence there, incredible puppet artistry, and cactus. Did you know there is cactus in Italy?

The one place Sofi had lived that I did not visit was Madrid, where she spent nearly 20 years in the middle of her life, painting at the Spanish court and befriending the young queen, Isabel (born Elisabeth de Valois). That will require another trip entirely, perhaps at some future time. I was in Madrid once about 30 years ago, (30 years? That is insane to think that I have lived long enough to have memories that are so old) on my way to Portugal. I spent two days wandering around the Prado, in a jet-lagged daze. I remember Las Meninas by Velazquez. I remember the Garden of Earthly Delights by Hieronymus Bosch. Like large parts of my life, the rest is a blur.

But I digress. I need to complete this book without a return trip to Spain. I have more than enough material spanning 93 years of her life. Sofonisba was a woman ahead of her time, a woman outside of time. And in Latin, her family name, Anguissola means, “the lone snake.” I think that is what she was. Someone who was moving about on her own, who occasionally shed her skin (metaphorically speaking), and who slipped in and out of many situations over time. I have been thinking about her life for over twenty years and now I am coming to the end of this first journey. Soon the book will be done and then we’ll see what happens next.

You know, today is Georg’s birthday. He would have been 83 today. Sofonisba outlived him by seventeen years, 400 years ago. Wow. That is a long time no matter how you measure it. I guess I just had to ramble a bit through time today and write. Happy birthday, Dad. I have other images from the trip I want to share. Other stories  I want to tell. Stay tuned, for more rambles are coming.

2 thoughts on “Woman Rambles Through Time”