I must be very excited about my trip to New York because as I begin writing this post, it is 2:11 a.m. on the morning of May 7. In less than twelve hours I will be ambling along the streets of Manhattan, taking in a museum, a hot dog, the smell of roasted chestnuts, and the honking of taxi cab horns. I have this strange desire to walk dozens of blocks on that crazy island with no distinct purpose in mind. (Although, if you know me, you know there will be some purpose, some destination, at the end of my wandering.)

I went to bed at 10:30 last night with the best of intentions. I fell into a peaceful sleep immediately. A couple hours into my rest, I woke up suddenly for no apparent reason and looked at the clock: 12:32. I made a trip to the loo, and on the way back to bed, I saw light flickering outside my window and realized there must be some thunder and lightning out there. I hunkered down amidst my pillows and covers, and sure enough, was serenaded for the next 45 minutes by distant rumbles and the occasional nearby boom, with all the attendant flashes of electrical energy that those sounds imply.

Eventually, I came to the conclusion that sleep was futile. I turned on the light and thought about what kinds of things I might do in the middle of the night, on the night before a big trip to a place filled with wonderful memories. A place that in and of itself is not a memory, it exists very fully in the Now. But in my mind, it is a mine field of memories: thoughts, feelings, relationships, experiences. Here are two random memories that have risen to the surface of consciousness this middle-of-the-night, thanks to the storm: 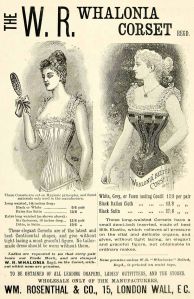 First semester of my senior year at Vassar, I served as an intern at the Museum of Broadcasting. Every Friday morning I took the train from Poughkeepsie into the city and sat for about six hours in a little attic room, inventorying pieces of paper in files. It was not a very exciting job. However, I learned that there were many interesting things in the files that had nothing to do with television or radio. For example, I remember finding a vintage magazine ad for corsets. I remember spending the better part of one of my Friday mornings in the attic copying down all the phrases in the ad to use them later in a poem. There is one phrase in particular that I still remember: “The Bones of Whalonia will make you smile.” I should find that poem. I know I have all my Vassar poems somewhere. The most exciting thing that ever happened at that job was the time that the actor Tony Randall came up to the attic to look for some clippings about himself. He was not particularly friendly and I can’t remember if I was able to find the clippings or not.

Then, when I was a post-grad school intern at Smith College many years later, I somehow weaseled my way into working with a video-performance artist named Douglas Davis on a project that was filmed in the middle of the night at the Guggenheim Museum. It was a sort of inter-continental murder mystery idea. I remember one gorgeous shot taken from far above the floor of a woman in a big circular skirt spinning like a dervish and looking up at the camera. That was beautiful. I would have liked to have been her.

Instead, my extremely important job took place behind the scenes, and it made me a nervous wreck. I had to get this guy on the telephone in Italy at just the right moment in the drama so that he could say words in real time about the murder that would thunder through the spiral-ringed hollow of that amazing building. Mind you, the year was 1984 and there were no cell phones. I was on the line with an international operator and I had to be spot on with getting the dude cued to say his lines.

I managed the right timing, but for some reason, he screamed his lines into the phone so loudly that the words were pretty much unintelligible. I guess he thought since he was calling from Italy, he had to scream. Later, the director said to me, “why was Antonio screaming his lines? We couldn’t understand a thing he said!” My only answer was, “I don’t know.” The best thing about that night was that when it was over, Douglas handed me some money and put me in a cab at five in the morning just as the sun was coming up over Manhattan. I felt like a girl in a movie as I rocketed down 5th Avenue toward my friend’s place on the Lower East Side. Even though I flubbed my big important job as the sound girl, I still felt rather cool.

So, I when I sat down to write this post, I had no idea I was going to unearth some memories. I was going to tell you what I have been doing since I got out of bed. I made coffee and set the timer for 3:15. I made chicken salad. Yes. You read it right. I made chicken salad because I have a roasted chicken that will go bad while I am gone for the next five days. I put some of it into a tortilla with mixed greens and sriracha sauce. It will make a really nice mid-morning snack on the plane. I will call my mom later and suggest she come over and get the rest of the chicken salad out of my fridge. I left her the bag of mixed greens and also a small batch of homemade peanut butter protein bars. (I am taking some of those with me for quick energy during my travels. I will no doubt need it.)

I dumped the entire contents of my purse on the bedroom floor a little while ago. Every few months, I need to do this, because it gets filled with useless flotsam and jetsam and I end up carrying around several pounds of things I don’t actually need. The pens alone could write 10 novels. There are old receipts, business cards, tubes of hand lotion, tubes of lipstick (that I almost never use), keys to things I won’t need on the trip (like Georg’s truck). Junk. I don’t want to take any junk to New York.

Well, now it is 2:46. I do feel a little tired now that I have gone back in time to two different New York memories, prepared food for my day ahead, and dumped a pile of junk on my floor. If I lay down now, I can get in a nice forty-five minute nap before the alarm goes off at 3:30. There will be freshly brewed coffee. Next time you hear from me, I will be in the Big Apple. Don’t worry. I will get more sleep eventually. That is why God gave us airplanes.

One thought on “Thunder Chicken Salad, Transatlantic Phone Calls, and the Bones of Whalonia”