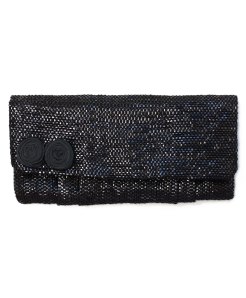 A friend of mine recently asked me what I meant when I referred to something I had posted here (see December 25) as “Up-Cycled Georg Art.”  Up-cycling, as I understand it, refers to the practice of taking something that is headed for the trash and turning it something both functional and beautiful. I first heard the term “up-cycled” about a month ago through my friends at Noonday Collection, a company that supports artisans by paying them fair market prices for their work. The items (jewelry, scarves, and other accessories) are sold to people who want to be stylish while helping people who live and toil on the other side of the world. The item that caught my imagination is this lovely little purse called the “Rewind Clutch.” These are made by women in India out of up-cycled VHS and cassette tapes. (Talk about getting rid of old tapes! See my post on December 22). Here, something that was on its way to becoming garbage is transformed and given a new life. I like that.

Everywhere in Georg’s world are boxes and piles of scraps that most estate managers would toss. These are things that he cut away from sheets of paper, postcards, art books, or even his own art. He would often extract a main figure (human, animal, or otherwise) from its original context and collage it into another reality. He always kept the scrap retaining the negative space that was left behind after the figure had been removed, like the empty feather shape that you see here. 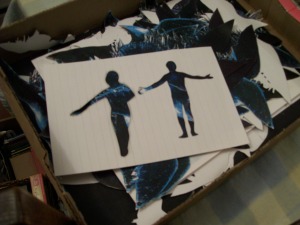 When it came time to make my holiday card this year, I had the good fortune to find the piece of notebook paper that had these two figures cut from it. I was playing around with them, placing them over different backgrounds and enjoying the various figures that revealed themselves depending on the backdrop.

Eventually, I placed these “empty people” over some other scraps of Georg’s art in a strategic manner to create what I viewed as one female character (on the left) tending to her garden and one male character (on the right) with a butterfly for a heart and his face turned to toward the harvest moon. They are not looking at each other, but they are standing together, peacefully, in the same boat. What appears “inside” the figures is actually the layer beneath or behind them. The garden, the boat, and the moon are glued on top of the piece of notebook paper. Inside the card, I wrote:

May your garden thrive
and your boat float.
May your heart soar
in this and every season. 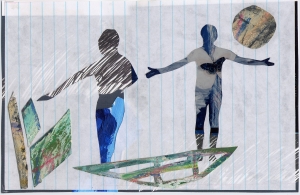 The image that came together before my eyes is what called the poem out of me. The entire process was extremely organic and playful. I did not have a plan when I started to move the scraps around on the table. The scraps told me what to do, and then the image in front of me told me what to write.

I wanted to make something to honor my dad. I think I did. You can imagine how much more potential there is here, sitting patiently in all of his things. I find it very hard to throw anything away, because every little piece of paper that has his mark on it, or his “cut,” so to speak, has the potential to be up-cycled into something beautiful. 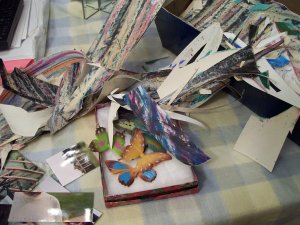 I could spend a lifetime yet (and I probably will) sorting through Georg’s remnants. I want to make new things from them, Lisa things. I don’t think Dad would mind. In fact, I think he would think it was pretty cool, especially if I blend his visuals with my words. I will not alter any works of his that he considered finished, but as far as the scraps or anything unfinished, I think it is fair game. He left all his art, done and un-done, to my sister and me. Eventually, we will find good homes for his finished masterpieces in museums, universities, hospitals, churches, retreat centers, and other public spaces the world over. At least, that is my hope and my intention. 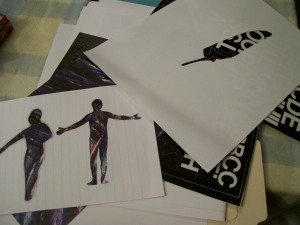 As for the things he never finished, or never started, or these colorful little scraps he kept just because they might one day make something interesting and thought-provoking, well. These things belong to me and my sister now, too. We will cherish them and up-cycle them to make wonderful and surprising new creations. You will see.