For days, I had been dreading one particular job in closing up my dad’s apartment on 8th Street, namely, clearing out his toiletries. Dad had a variety of lotions, soaps, and other unguents in his medicine cabinet. He had Calvin Klein deodorant, a Conair electric razor, a pair of manicure scissors. He had a leather kit bag as old as the hills balanced on the edge of his bathroom sink. I think it was the same kit bag he’d had since I was a child. Contained within, I found crusty old tubes of toothpaste, a couple pairs of nail clippers, some ancient Band-Aids. He had three tooth brushes going in varying stages of decline.

Yesterday afternoon, I finally brought myself reluctantly to the task. I simply threw everything away. I did not even keep the unopened package of dental tape I had bought for him about two months ago. He had explained in no uncertain terms that he must have tape, not floss. I had to hunt around in the dental care aisle at Walgreens to locate it. He was so happy when I brought it home to him, but somehow, he never actually opened the package. Now, both he and the dental tape are gone.

“Operation Clean-Out” took me less than sixty seconds to complete because I had already determined going in that I would keep nothing. I threw everything into a garbage bag almost without looking at it. I did not want to see little whiskers on the electric razor. I did not want to get sticky toothpaste on my fingers. I could not imagine assessing each vial of bodywash or aftershave to determine its intrinsic value. Who would want these used and intimate things now?

That said, I did keep his bathroom scale. It is the kind that needs a battery. I could use a good scale. I am keeping the scale because it is “used and intimate” in a different way. He would have stood on it each morning (when he could still stand unsupported) to check his body weight; to monitor his measure relative to earth’s gravity.

In this new world without him, his measure is of a much different nature. It bears no resemblance to physical heft as we know it. And yet, I feel the weight of him sometimes as if he were sitting in the room with me, or stirring soup in the kitchen, or making marks on a large piece of paper stapled to the wall of his studio. I trust that in time, I will learn to find a way to balance the weight bearing down on my heart—brought on by the disappearance of his body and all the little items that attended it—with the buoyancy of his spirit.

At some future time, perhaps this buoyancy will win out, and the sadness will come completely untethered. If the works of art that he left behind are any indication of his wishes for us here in the physical world, I know it is this lightness and this buoyancy that he would ask us always to remember. 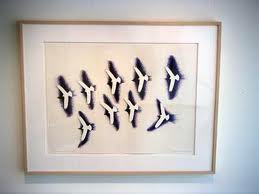 View all posts by lisavihos

10 thoughts on “In Search of Buoyancy”